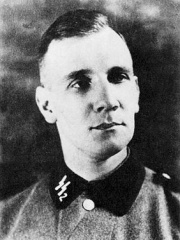 Kurt Gerstein (11 August 1905 – 25 July 1945) was a German SS officer and head of technical disinfection services of the Hygiene-Institut der Waffen-SS (Institute for Hygiene of the Waffen-SS). After witnessing mass murders in the Belzec and Treblinka Nazi extermination camps, Gerstein gave a detailed report to Swedish diplomat Göran von Otter, as well as to Swiss diplomats, members of the Roman Catholic Church with contacts to Pope Pius XII, and to the Dutch government-in-exile, in an effort to inform the international community about the Holocaust. In 1945, following his surrender, he wrote the Gerstein Report covering his experience of the Holocaust. Read more on Wikipedia

Since 2007, the English Wikipedia page of Kurt Gerstein has received more than 214,542 page views. His biography is available in 21 different languages on Wikipedia making him the 30th most popular engineer.