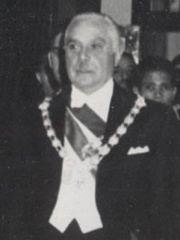 Rafael Leónidas Trujillo Molina ( troo-HEE-yoh, Spanish: [rafaˈel leˈonidas tɾuˈxiɟ͡ʝo moˈlina]; 24 October 1891 – 30 May 1961), nicknamed El Jefe (Spanish: [el ˈxefe], "The Chief" or "The Boss"), was a Dominican dictator who ruled the Dominican Republic from February 1930 until his assassination in May 1961. He served as president from 1930 to 1938 and again from 1942 to 1952, ruling for the rest of the time as an unelected military strongman under figurehead presidents. His 31 years in power, to Dominicans known as the Trujillo Era (Spanish: El Trujillato), are considered one of the bloodiest eras ever in the Americas, as well as a time of a personality cult, when monuments to Trujillo were in abundance. Read more on Wikipedia

Rafael Trujillo was a Dominican dictator who ruled the Dominican Republic from 1930 to 1961. He is most famous for his brutal rule.

Among politicians, Rafael Trujillo ranks 1,522 out of 15,710. Before him are John II of Castile, Mohamed Morsi, Dorgon, Mahmud of Ghazni, Hiero II of Syracuse, and Edward of Westminster, Prince of Wales. After him are Childebert I, Florianus, Gaston, Duke of Orléans, Francis II Rákóczi, Joan II of Navarre, and Conrad I of Germany.

Among POLITICIANS In Dominican Republic