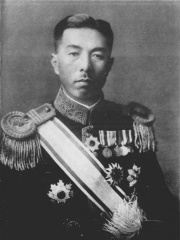 Prince Fumimaro Konoe (Japanese: 近衞 文麿, Hepburn: Konoe Fumimaro, often Konoye, 12 October 1891 – 16 December 1945) was a Japanese politician and prime minister. During his tenure, he presided over the Japanese invasion of China in 1937 and the breakdown in relations with the United States, which ultimately culminated in Japan's entry into World War II. He also played a central role in transforming his country into a totalitarian state by passing the National Mobilization Law and founding the Imperial Rule Assistance Association. Despite Konoe's attempts to resolve tensions with the United States, the rigid timetable imposed on negotiations by the military and his own government's inflexibility regarding a diplomatic resolution set Japan on the path to war. Read more on Wikipedia

Among politicians, Fumimaro Konoe ranks 2,359 out of 15,577. Before him are Milan I of Serbia, Cleopatra IV of Egypt, Ptolemy X Alexander I, Manco Inca Yupanqui, Æthelberht, King of Wessex, and Victor Amadeus I, Duke of Savoy. After him are Alfonso II of Naples, Louis IV, Grand Duke of Hesse, Andrej Babiš, Françoise Marie de Bourbon, Anund Jacob, and Jovanka Broz.