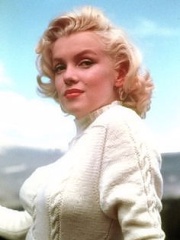 Marilyn Monroe (born Norma Jeane Mortenson; June 1, 1926 – August 4, 1962) was an American actress, singer, and model. Famous for playing comedic "blonde bombshell" characters, she became one of the most popular sex symbols of the 1950s and early 1960s, as well as an emblem of the era's sexual revolution. She was a top-billed actress for a decade, and her films grossed $200 million (equivalent to $2 billion in 2021) by the time of her death in 1962. Read more on Wikipedia

Marilyn Monroe is most famous for her time as a movie star. She starred in many films, including Gentlemen Prefer Blondes, Some Like It Hot, and The Seven Year Itch.

The Guardian
Blonde by Joyce Carol Oates audiobook review – an imagined life of Marilyn Monroe
Jayne Atkinson resists the cliches of the film star’s breathy voice in a tough, fictionalised tale of abuse and fameBlonde begins with a hallucinatory prologue in which Death takes the form of a bicycle messenger threading his way through traffic to an addres…
Fiona Sturges
Uncrate.com
Womanizer Marilyn Monroe Special Edition Stimulator
Marilyn Monroe was a feminist icon. So it's somehow fitting that Womanizer, the industry leader in female sex toys, has created a special edition clitoral suction stimulator in her honor. This palm-sized sex toy uses Pleasure Air technology to apply...
Uncrate
/FILM
Studio Execs Didn't Understand What They Had On Their Hands With Marilyn Monroe
Today, Marilyn Monroe is recognized as the ultimate movie star. She was a beautiful, media darling with a rags-to-riches story and boatloads of talent, all of which made audiences (and fellow celebrities) fall head over heels in love with her. Throughout the …
Christian Gainey
/FILM
Blonde Director Andrew Dominik Kept Ana De Armas From Showing One Specific Emotion As Marilyn Monroe
How did Ana de Armas manage to channel Hollywood's most iconic starlet in "Blonde," Netflix's new movie about Ana de Armas? The actress is known for her roles in a variety of films, from the murder mystery "Knives Out," where she plays characters with a knack…
Shae Sennett