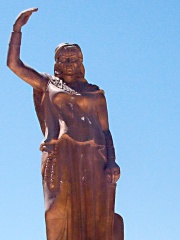 Dihya or Damya or in Arabic Al-Kahina (Arabic: الكاهنة‎, lit. 'the deviner') was a Berber queen and a religious and military leader who led indigenous resistance to the Muslim conquest of the Maghreb, the region then known as Numidia notably defeating the Umayyad forces in the Battle of Meskiana after which she became the uncontested ruler of the whole Maghreb. Read more on Wikipedia

Dihya is most famous for being the first woman to rebel against the French occupation of Algeria. She led a group of Algerian women in an attack on French soldiers, which resulted in her capture and execution.

Page views of Dihyas by language

Among politicians, Dihya ranks 1,873 out of 15,710. Before her are Archduke Maximilian Francis of Austria, Gurbanguly Berdimuhamedow, Julia Drusilla, Michael the Brave, Mohammed Daoud Khan, and Francis, Duke of Anjou. After her are Sima Zhao, Otto Strasser, Abdel Fattah el-Sisi, Afonso II of Portugal, Emperor Huizong of Song, and Lucius Quinctius Cincinnatus.

Among people born in 700, Dihya ranks 7. Before her are Pope Adrian I, Pope Paul I, Anastasios II, Pope Gregory III, Pope-elect Stephen, and Philippikos Bardanes. After her are Tiberius III, Theodosius III, Piruz Nahavandi, Abdullah ibn Saba', Ibrahim ibn al-Walid, and Paolo Lucio Anafesto. Among people deceased in 601, Dihya ranks 1. After her are Reccared I and Bertha of Kent.