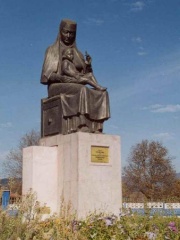 Hayme Hatun (Ottoman Turkish: حائمہ خاتون), also known as Hayma Ana (Mother Hayma), was the grandmother of Osman I, founder of the Ottoman Empire and the mother of Ertuğrul Gazi, the leader of the Kayı clan of the Oghuz Turks. Read more on Wikipedia

Since 2007, the English Wikipedia page of Hayme Hatun has received more than 560,401 page views. Her biography is available in 15 different languages on Wikipedia. Hayme Hatun is the 3,518th most popular politician.

Hayme Hatun is most famous for being the wife of Sultan Mehmed II.

Among politicians, Hayme Hatun ranks 3,518 out of 15,710. Before her are Emperor Zhang of Han, Margaret of Savoy, Vicereine of Portugal, U Nu, Othniel, Lionel Jospin, and Urukagina. After her are Henry II, Duke of Austria, Harvey Milk, Plaek Phibunsongkhram, Sun Xiu, Arsaces I of Parthia, and Niceto Alcalá-Zamora.

Among people born in 1176, Hayme Hatun ranks 2. Before her is Leopold VI, Duke of Austria. After her are Anna Komnene Angelina, Az-Zahir, and Al-Mu'azzam Isa.