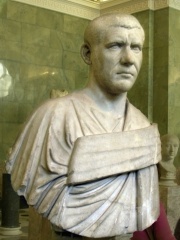 Philip I (Latin: Marcus Julius Philippus Augustus; c. 204 – September 249 AD), also known commonly as the Arab (Latin: Arabus), was Roman Emperor from February 244 to September 249. He was born in Aurantis, Arabia, in a city situated in modern-day Syria. Read more on Wikipedia

Since 2007, the English Wikipedia page of Philip the Arab has received more than 798,145 page views. His biography is available in 63 different languages on Wikipedia making him the 584th most popular politician.

Page views of Philip the Arabs by language

Among politicians, Philip the Arab ranks 579 out of 14,801. Before him are Leopold III of Belgium, Béla IV of Hungary, John of Bohemia, Olav V of Norway, Maximilian II, Holy Roman Emperor, and Artaxerxes II of Persia. After him are Philip the Good, Charles I of Anjou, Frederick William IV of Prussia, Rurik, Juliana of the Netherlands, and Sweyn Forkbeard.