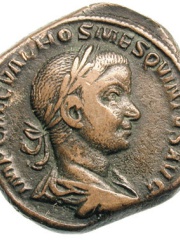 Hostilian (Latin: Gaius Valens Hostilianus Messius Quintus; died November 251) was Roman emperor from July to November 251. Hostilian was born to Decius and Herennia Etruscilla at an unknown date and elevated to Caesar in May 251 by Decius, the same month as his older brother, Herennius Etruscus, was raised to co-emperor. After Decius and Herennius Etruscus were killed at the Battle of Abritus, an ambush by the Goths, Trebonianus Gallus was proclaimed emperor by the legions. Read more on Wikipedia

Page views of Hostilians by language

Among politicians, Hostilian ranks 1,962 out of 15,710. Before him are Chlothar III, Jeongjong, 3rd monarch of Goryeo, Nikolai Podgorny, Prince Edward, Duke of Kent and Strathearn, William II of Sicily, and Raisa Gorbacheva. After him are Sigismund of Burgundy, Beyhan Sultan, Desiderius, Maymunah bint al-Harith, Louise of Orléans, and Khasekhemwy.