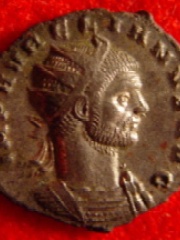 Aurelian (Latin: Lucius Domitius Aurelianus; 9 September 214 – c. October 275) was Roman emperor from 270 to 275. As emperor, he won an unprecedented series of military victories which reunited the Roman Empire after it had practically disintegrated under the pressure of barbarian invasions and internal revolts. Read more on Wikipedia

Since 2007, the English Wikipedia page of Aurelian has received more than 1,649,812 page views. His biography is available in 76 different languages on Wikipedia (up from 75 in 2019). Aurelian is the 541st most popular politician (down from 370th in 2019), the 7th most popular biography from Bulgaria (down from 6th in 2019) and the 3rd most popular Bulgarian Politician.

Aurelian is most famous for his victory over the Palmyrene Empire in 274 AD.

Page views of Aurelians by language

Among politicians, Aurelian ranks 541 out of 15,710. Before him are Louis I of Hungary, John Hunyadi, Augustus II the Strong, Frederick William III of Prussia, Osman III, and Yongzheng Emperor. After him are Mustafa III, Peter II of Russia, Gorm the Old, Alexander IV of Macedon, Sneferu, and Friedrich Ebert.