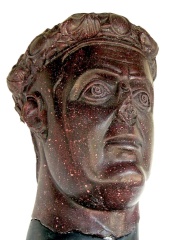 Galerius (; Gaius Galerius Valerius Maximianus; c. 258 – May 311) was Roman emperor from 305 to 311. During his reign he campaigned, aided by Diocletian, against the Sassanid Empire, sacking their capital Ctesiphon in 299. Read more on Wikipedia

Galerius was the emperor of the eastern Roman Empire from 305 to 311. He is most famous for his edict of toleration, which granted religious freedom to Christians, Jews, and other religions.

Page views of Galeriuses by language

Among politicians, Galerius ranks 397 out of 15,710. Before him are Willy Brandt, Tiberius Gracchus, Woodrow Wilson, Richard II of England, Toyotomi Hideyoshi, and Theodoric the Great. After him are Leopold I of Belgium, Miklós Horthy, Orhan, William III of England, Radovan Karadžić, and Moctezuma II.

Among people born in 250, Galerius ranks 2. Before him is Helena. After him are Constantius Chlorus, Saint Florian, Pope Caius, Lactantius, Pope Miltiades, Saint Maurice, Pope Marcellinus, Pope Alexander I of Alexandria, Pope Eusebius, and Carinus. Among people deceased in 311, Galerius ranks 2. Before him is Diocletian. After him are Dorothea of Caesarea, Pope Peter I of Alexandria, and Methodius of Olympus.