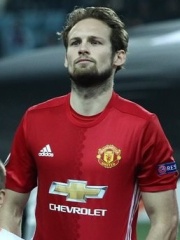 Daley Blind (Dutch pronunciation: [ˈdeːli ˈblɪnt]; born 9 March 1990) is a Dutch professional footballer who plays as a defensive midfielder, left-back or centre-back for Ajax and the Netherlands national team. He is the son of former Ajax defender and former Netherlands national team manager Danny Blind.Blind rose through the youth ranks at Ajax, becoming a regular after a loan to Groningen, and won four consecutive Eredivisie titles with the club. In September 2014, he transferred to Manchester United for £13.8 million, where he was part of the team that won four trophies including the FA Cup, EFL Cup and UEFA Europa League. Read more on Wikipedia

Since 2007, the English Wikipedia page of Daley Blind has received more than 1,893,818 page views. His biography is available in 52 different languages on Wikipedia making him the 1,440th most popular soccer player.

Among soccer players, Daley Blind ranks 1,436 out of 13,233. Before him are Philippe Mexès, Bror Mellberg, Martí Ventolrà, Per Mertesacker, György Szűcs, and Trifon Ivanov. After him are Mehmet Scholl, Pietro Ferraris, Ricardo Bochini, Riyad Mahrez, Eulogio Martínez, and Raúl Albiol.