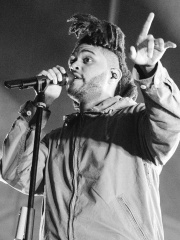 Abel Makkonen Tesfaye (born February 16, 1990), known professionally as the Weeknd (pronounced "weekend"), is a Canadian singer, songwriter and record producer. Born in Toronto and raised in Scarborough, Tesfaye began his recording career in 2009 by anonymously uploading his song "Do It" to YouTube. Two years later, he met music executives Sal Slaiby and Amir Esmailian, with whom he founded XO Records. Read more on Wikipedia

Page views of The Weeknds by language

Among singers, The Weeknd ranks 815 out of 3,541. Before him are Vanilla Ice, Sami Yusuf, Riccardo Fogli, Dr. John, Gregg Allman, and Michael Bublé. After him are Phil Anselmo, Dennis Frederiksen, Lightnin' Hopkins, Guy Béart, Elaine Paige, and Angelica Catalani.