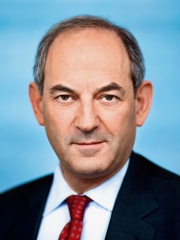 Marius Job Cohen (Dutch pronunciation: [ˈmaːrijɵs ˈjɔp koːˈɦɛn]; born 18 October 1947) is a retired Dutch politician and jurist who served as Mayor of Amsterdam from 2001 to 2010 and Leader of the Labour Party (PvdA) from 2010 to 2012.Cohen studied Law at the University of Groningen obtaining a Master of Laws degree. Cohen worked as a worked as researcher at the Leiden University before finishing his thesis and graduated as a Doctor of Law in Jurisprudence. Cohen worked as a professor of Jurisprudence at the State University of Limburg from September 1983 until June 1993, he also served as Rector Magnificus of the State University of Limburg from January 1991. Read more on Wikipedia

Among politicians, Job Cohen ranks 12,495 out of 15,710. Before him are Jón Magnússon, Bhairon Singh Shekhawat, Durward Knowles, John W. Foster, Markus Söder, and Dorothea Köring. After him are Pencho Zlatev, Per Ahlmark, Abdur Rahman Biswas, Eulalio Gutiérrez, Naplanum, and Cecilia of Normandy.