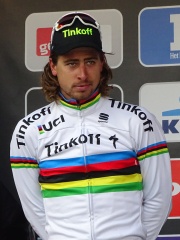 Peter Sagan (Slovak pronunciation: [ˈpɛtɛr ˈsaɡan]; born 26 January 1990) is a Slovak professional road bicycle racer, who currently rides for UCI WorldTeam Bora–Hansgrohe. Sagan had a successful junior cyclo-cross and mountain bike racing career, winning the Junior Mountain Bike World Championship in 2008, before moving to road racing. Sagan is considered one of cycling's greatest talents, having earned many prestigious victories, including three consecutive World Championships, one European Championship, two Paris–Nice stages, seven Tirreno–Adriatico stages, one in the Tour de Romandie, three and the overall classification in the Tour de Pologne, a record seventeen stages and the overall in the Tour of California, and another fifteen in the Tour de Suisse. Read more on Wikipedia

Since 2007, the English Wikipedia page of Peter Sagan has received more than 1,828,565 page views. His biography is available in 39 different languages on Wikipedia making him the 88th most popular cyclist.

Among CYCLISTS In Slovakia