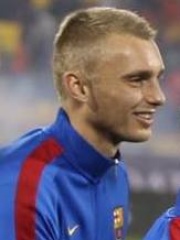 Jacobus Antonius Peter Johannes "Jasper" Cillessen (Dutch pronunciation: [ˈjɑspər ˈsɪləsə(n)]; born 22 April 1989) is a Dutch professional footballer who plays as a goalkeeper for Spanish club Valencia and the Netherlands national team. He joined NEC's youth team in 2001, making his professional debut for them in 2010, he signed for Ajax for €3 million a year later. He played in 141 matches for Ajax in six seasons, winning honours including three Eredivisie titles. Read more on Wikipedia

Since 2007, the English Wikipedia page of Jasper Cillessen has received more than 1,345,017 page views. His biography is available in 50 different languages on Wikipedia making him the 1,244th most popular soccer player.