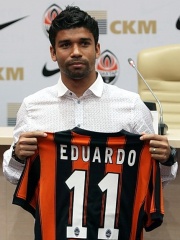 Eduardo Alves da Silva (Brazilian Portuguese: [eduˈaɾdu dɐ ˈsiwvɐ], Croatian pronunciation: [eduâːrdo dasǐlʋa]; born 25 February 1983), commonly known as Eduardo, sometimes nicknamed Dudu, is a Brazilian-born Croatian professional footballer who plays as a forward. Capable of playing any forward position, he started as a striker, but is deployed mostly as a winger or second striker during the last few years. He began his career with his hometown club in Brazil, Bangu Atlético Clube. Read more on Wikipedia

Since 2007, the English Wikipedia page of Eduardo da Silva has received more than 980,618 page views. His biography is available in 49 different languages on Wikipedia making him the 2,023rd most popular soccer player.