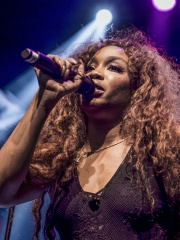 Solána Imani Rowe (born November 8, 1990), known professionally as SZA (), is an American singer, rapper, and songwriter. In October 2012, SZA self-released her debut EP, See.SZA.Run, which she then followed up with her second EP, S, in April 2013. In July 2013, she signed with the hip hop record label Top Dawg Entertainment, through which she released Z, her third EP and first retail release, in April 2014. Read more on Wikipedia

Since 2007, the English Wikipedia page of SZA has received more than 146,019 page views. Her biography is available in 20 different languages on Wikipedia making her the 1,647th most popular singer.

Page views of SZAS by language