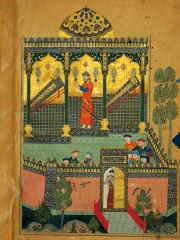 Since 2007, the English Wikipedia page of Baysunghur has received more than 6,417 page views. His biography is available in 15 different languages on Wikipedia making him the 7,673rd most popular politician.

Page views of Baysunghurs by language

Among people born in 1397, Baysunghur ranks 11. Before him are Paolo dal Pozzo Toscanelli, Isabella of Portugal, Duchess of Burgundy, Hacı I Giray, Jahan Shah, Francesco Squarcione, and Chimalpopoca. After him are Tlacaelel and Louis, Duke of Guyenne. Among people deceased in 1433, Baysunghur ranks 7. Before him are Zheng He, John I of Portugal, Emperor Go-Komatsu, Lê Lợi, Lidwina, and Joan of France, Duchess of Brittany.