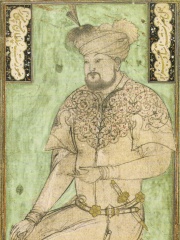 Sultan Husayn Bayqara Mirza (Persian: حسین بایقرا / Husayn Bāyqarā; June/July 1438 – 4 May 1506) was the Timurid ruler of Herat from 1469 until May 4, 1506, with a brief interruption in 1470.A skilled statesman, Sultan Husayn Bayqara was best known for his interest in the arts and was renowned as a benefactor and patron of learning in his kingdom, with his reign being heralded as the second Timurid Renaissance. He has been described as "the quintessential Timurid ruler of the later period in Transoxiana" and his sophisticated court and generous artistic patronage was a source of admiration, particularly from his cousin, the Mughal emperor Babur. Read more on Wikipedia

Sultan Husayn Bayqara is most famous for being the sultan of the Timurid Empire from 1447 to 1457. He is also known for his military prowess and as a patron of the arts.

Among politicians, Sultan Husayn Bayqara ranks 3,168 out of 15,577. Before him are Topa Inca Yupanqui, Tomislav of Croatia, Qazi Muhammad, Albrecht von Roon, Joachim Frederick, Elector of Brandenburg, and Maria of Alania. After him are Netjerkare Siptah, Seth-Peribsen, Ḫattušili I, Rudy Giuliani, Juan Almeida Bosque, and Jörg Haider.

Among people born in 1438, Sultan Husayn Bayqara ranks 4. Before him are Radu cel Frumos, Stephen Tomašević of Bosnia, and Philip II, Duke of Savoy. After him are Melozzo da Forlì, Peter II, Duke of Bourbon, Despina Khatun, Margaret of Bourbon, and James II of Cyprus. Among people deceased in 1506, Sultan Husayn Bayqara ranks 7. Before him are Christopher Columbus, Philip I of Castile, Andrea Mantegna, Yeonsangun of Joseon, Alexander Jagiellon, and Anne of Foix-Candale. After him are Sesshū Tōyō, Beatriz, Duchess of Viseu, Alexander Agricola, Sancha of Aragon, João I of Kongo, and Robert Henryson.