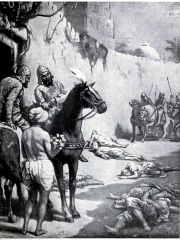 Ikhtiyār al-Dīn Muḥammad Bakhtiyār Khaljī, also known as Bakhtiyar Khalji, was a Turko-Afghan military general who led the Muslim conquests of the eastern Indian regions of Bengal and Bihar and established himself as their ruler.Khalji's invasions the Indian subcontinent between A.D. 1197 and 1206 led to mass flight and murder of Buddhist monks, and caused grave damage to the traditionally Buddhist institutions of higher learning in Northern India. In Bengal, Khalji's reign was responsible for displacement of Buddhism by Islam. His rule is said to have begun the Islamic rule in Bengal, most notably those of Bengal Sultanate and Mughal Bengal.Bakhtiyar also launched the Tibet campaign, in which he was killed in 1206. Read more on Wikipedia

Among MILITARY PERSONNELS In Afghanistan

Among military personnels born in Afghanistan, Muhammad bin Bakhtiyar Khalji ranks 1. After him are Islam Bibi (1974).