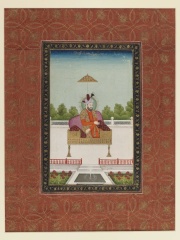 Mirza Jalal-ud-din Miran Shah Beg (1366 – 20 April 1408), commonly known as Miran Shah (Persian: میران شاہ), was a son of the Central Asian conqueror Timur, founder of the Timurid Empire. During his father's reign, Miran Shah was initially a powerful regional governor and prominent military commander, having aided Timur in his conquests as well as suppressing several revolts. However, after facing accusations of destructive and hedonistic behaviour, the prince was later deposed from these roles by the emperor. Read more on Wikipedia

Among people born in 1366, Miran Shah ranks 3. Before him are Hubert van Eyck and Anne of Bohemia. After him are Jean II Le Maingre and George VII of Georgia. Among people deceased in 1408, Miran Shah ranks 5. Before him are Taejo of Joseon, John VII Palaiologos, Valentina Visconti, Duchess of Orléans, and Ashikaga Yoshimitsu. After him are John Gower and Henry Percy, 1st Earl of Northumberland.