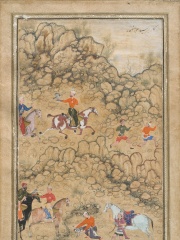 Muhammad Bairam Khan (c. 18 January 1501 – c. 31 January 1561) was an important military commander, and later commander-in-chief of the Mughal army, a powerful statesman and regent at the court of the Mughal Emperors, Humayun and Akbar. He was also the guardian, chief mentor, adviser, teacher and the most trusted ally of Akbar. Akbar honored him as Khan-i-Khanan, which means "King of Kings". Read more on Wikipedia

Among politicians, Bairam Khan ranks 6,479 out of 15,710. Before him are William IV, Duke of Aquitaine, William, Duke of Jülich-Cleves-Berg, Adolph John I, Count Palatine of Kleeburg, Jan Zamoyski, García Fernández of Castile, and Anton Korošec. After him are Marien Ngouabi, Joe Davis, Maxwell D. Taylor, Alois Eliáš, Antalcidas, and George Wallace.