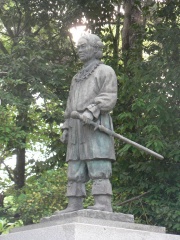 Yamato Takeru (ヤマトタケルノミコト, Yamato Takeru no Mikoto), originally Prince Ōsu (小碓命, Ōsu no Mikoto), was a Japanese legendary prince of the Yamato dynasty, son of Emperor Keikō, who is traditionally counted as the 12th Emperor of Japan. His name written in kanji can vary, in the Nihon Shoki it is spelled 日本武尊 and in the Kojiki it is 倭建命. The story of his life and death are told principally in the Japanese chronicles Kojiki (712) and Nihon Shoki (720), but also mentioned in Kogo Shūi (807) and some histories like the Hitachi no Kuni Fudoki (常陸国風土記) (721). Read more on Wikipedia

Since 2007, the English Wikipedia page of Yamato Takeru has received more than 178,878 page views. His biography is available in 20 different languages on Wikipedia making him the 4,768th most popular politician.

Among politicians, Yamato Takeru ranks 4,740 out of 14,801. Before him are Moussa Traoré, Robert Clive, Miran Shah, Princess Victoria of the United Kingdom, Antonia the Elder, and Hazael. After him are Igor Smirnov, Ahmed Izzet Pasha, Maria of Montpellier, Horace Walpole, Countess Palatine Caroline of Zweibrücken, and Georgy Pyatakov.