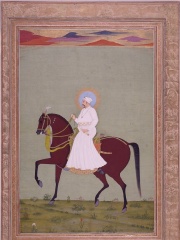 Nasir-ud-Din Muḥammad Shah (Persian: ناصرالدین محمد شاه‎) (born Roshan Akhtar (Persian: روشن اختر‎)) (7 August 1702 – 26 April 1748) was the thirteenth Mughal emperor, who reigned from 1719 to 1748. He was son of Khujista Akhtar, the fourth son of Bahadur Shah I. With the help of the Sayyid brothers, he ascended the throne at the young age of 17. He later got rid of them with the help of Asaf Jah I – Syed Hussain Ali Khan was murdered at Fatehpur Sikri in 1720 and Syed Hassan Ali Khan Barha was fatally poisoned in 1722. Read more on Wikipedia

Among politicians, Muhammad Shah ranks 7,116 out of 15,710. Before him are Juan Vicente Gómez, Eurydice I of Macedon, Dolon, Jean Rey, Thành Thái, and Antoine Gizenga. After him are An Shigao, Publius Decius Mus, Tung Chee-hwa, Jorge Alessandri, Manuel Urrutia Lleó, and William VI, Landgrave of Hesse-Kassel.