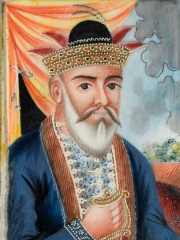 Emir Dost Mohammad Khan Barakzai (Pashto/Dari: دوست محمد خان بارکزی; December 23, 1793 – June 9, 1863), nicknamed the Amir-i Kabir, was the founder of the Barakzai dynasty and one of the prominent rulers of Afghanistan during the First Anglo-Afghan War. With the decline of the Durrani dynasty, he became the Emir of Afghanistan in 1826. He was the 11th son of Payendah Khan, chief of the Barakzai Pashtuns, who was killed in 1799 by King Zaman Shah Durrani.At the beginning of his rule, the Afghans lost their former stronghold of Peshawar Valley in March 1823 to the Sikh Khalsa Army of Ranjit Singh at the Battle of Nowshera. Read more on Wikipedia

Among politicians, Dost Mohammad Khan ranks 6,115 out of 15,710. Before him are Tvrtko II of Bosnia, Leszek the White, Frederick William, Duke of Courland, Titus Flavius Clemens, Ernst von Weizsäcker, and Muhyiddin Yassin. After him are Rudolf I, Duke of Bavaria, Bohemond IV of Antioch, Jayavarman II, Leopold, Prince of Salerno, Otto Braun, and Princess Margaret of Prussia.