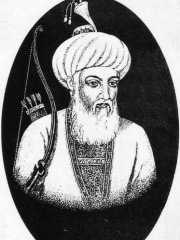 Mu'izz ad-Din Muhammad ibn Sam (Persian: معز الدین محمد بن سام), also Mu'izz ad-Din Muhammad Ghori, also Ghūri (Persian: معز الدین محمد غوری) (1144 – March 15, 1206), commonly known as Muhammad of Ghor, also Ghūr, or Muhammad Ghori, also Ghūri, was a ruler from the Ghurid dynasty based in what is today Afghanistan who ruled from 1173 CE to 1206 CE. He extended the Ghurid dominions eastwards and laid the foundation of Islamic rule in the Indian Subcontinent, which lasted after him for nearly half a millennium. During his joint reign with his brother Ghiyasuddin Ghori (r. c. Read more on Wikipedia

Muhammad of Ghor is most famous for conquering the Indian subcontinent and founding the Delhi Sultanate.

Page views of Muhammad of Ghors by language

Among politicians, Muhammad of Ghor ranks 4,240 out of 15,577. Before him are Baldwin V, Count of Flanders, George II Rákóczi, João Lourenço, Enrico De Nicola, Charles, Prince of Viana, and Johan van Oldenbarnevelt. After him are Rudolf Kirchschläger, Ramiro I of Asturias, Grand Duchess Elena Vladimirovna of Russia, Louis Joseph, Prince of Condé, Ferdinand Buisson, and Rudolf Slánský.

Among people born in 1160, Muhammad of Ghor ranks 7. Before him are Pope Innocent III, Pope Gregory IX, Sibylla, Queen of Jerusalem, Pérotin, Ali ibn al-Athir, and Abu Yusuf Yaqub al-Mansur. After him are Arnaud Amalric, Ma Yuan, Alys of France, Countess of Vexin, Hartmann von Aue, Dulce of Aragon, and Berthold V, Duke of Zähringen. Among people deceased in 1206, Muhammad of Ghor ranks 3. Before him are Ismail al-Jazari and Adela of Champagne. After him are Amalric of Bena, Muhammad bin Bakhtiyar Khalji, and John X of Constantinople.