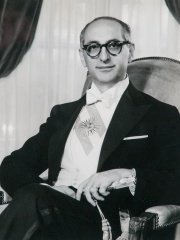 Arturo Frondizi Ércoli (October 28, 1908 – April 18, 1995) was an Argentine lawyer, journalist, teacher and politician, who was elected President of Argentina and ruled between May 1, 1958 and March 29, 1962, when he was overthrown by a military coup. His government was characterized by an ideological shift, inspired by Rogelio Frigerio, towards a type of developmentalism less promoted by the State and more oriented to the development of heavy industry as a consequence of the installation of multinational companies. Its socio-labor, oil and educational policy had peaks of high conflict, with large demonstrations and strikes by the labor movement and the student movement, as well as numerous attacks against the government for political purposes in which 17 civilians and soldiers were murdered.The Frondizi government suffered great pressure from the armed forces, which was imposed on it by the liberal Economy Ministers Álvaro Alsogaray and Roberto Alemann, and the retirement of Frigerio as a government advisor. Read more on Wikipedia

Among politicians, Arturo Frondizi ranks 7,880 out of 15,577. Before him are Anna Vasa of Sweden, Ferdinando Gonzaga, Duke of Mantua, Mstislav of Chernigov, Vladislav I of Wallachia, Ivo Sanader, and Benjamin Mkapa. After him are Rostislav I of Kiev, Infanta Maria of Guimarães, Frederick V, Burgrave of Nuremberg, Andrés Rodríguez, Senjūrō Hayashi, and Frederick William, Elector of Hesse.