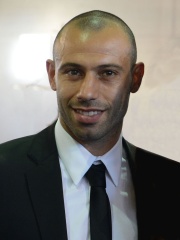 Javier Alejandro Mascherano (Spanish pronunciation: [xaˈβjeɾ mastʃeˈɾano], Italian: [maskeˈrano]; born 8 June 1984) is an Argentine professional footballer who plays as a defensive midfielder or centre-back for Argentine Primera División club Estudiantes de La Plata.Mascherano began his career at River Plate, where he earned his first senior honours, the Argentine Primera División, in 2003–04. He moved to Brazilian side Corinthians in 2005, winning the Brazilian Série A in his first season. Mascherano then moved to Europe, signing for Premier League side West Ham United, but his brief time at the club was blighted by unusual contract terms with Global Soccer Agencies. Read more on Wikipedia

Since 2007, the English Wikipedia page of Javier Mascherano has received more than 3,084,740 page views. His biography is available in 68 different languages on Wikipedia making him the 708th most popular soccer player.