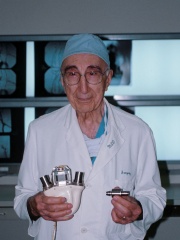 Michael Ellis DeBakey (born Michel Dabaghi; September 7, 1908 – July 11, 2008) was a Lebanese-American vascular surgeon and cardiac surgeon, scientist and medical educator who became the chancellor emeritus of Baylor College of Medicine in Houston, Texas, director of the Houston Methodist DeBakey Heart & Vascular Center (formerly known as Methodist DeBakey Heart & Vascular Center), and senior attending surgeon at Houston Methodist Hospital (formerly known as the Methodist Hospital) in Houston, with a career spanning 75 years. Born to Lebanese Christian immigrants, DeBakey was inspired to pursue a career in medicine by the physicians that he had met at his father's drug store, and he simultaneously learned sewing skills from his mother. He subsequently attended Tulane University for his premedical course and Tulane University School of Medicine to study medicine. Read more on Wikipedia