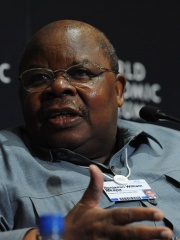 Benjamin William Mkapa (born November 12, 1938) is a Tanzanian politician who was the third President of Tanzania, in office from 1995 to 2005. Read more on Wikipedia

Since 2007, the English Wikipedia page of Benjamin Mkapa has received more than 178,357 page views. His biography is available in 33 different languages on Wikipedia making him the 7,749th most popular politician.

Among politicians, Benjamin Mkapa ranks 7,709 out of 14,801. Before him are Phormio, Hannelore Kohl, Frederick Louis, Prince of Hohenlohe-Ingelfingen, Kōichirō Matsuura, Kamehameha II, and Louis X, Duke of Bavaria. After him are Achille Varzi, Spyros Kyprianou, Zuzana Čaputová, King Yi of Zhou, Julia, and Infanta Elena, Duchess of Lugo.