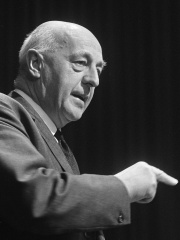 Sicco Leendert Mansholt (Dutch pronunciation: [ˈsɪkoː ˈleːndərt ˈmɑnsɦɔlt]; 13 September 1908 – 29 June 1995) was a Dutch farmer, politician and diplomat of the Social Democratic Workers' Party (SDAP) and later the Labour Party (PvdA), who served as the President of the European Commission from 1 March 1972 until 5 January 1973.Mansholt worked as a farmer in Wieringermeer from 1937 until 1945. In 1940, during World War II, he joined the Dutch resistance against the German occupiers and helped shelter refugees. Following the end of World War II, Mansholt was appointed as acting Mayor of Wieringermeer, serving from 30 April 1945 until 22 May 1945. Read more on Wikipedia

Among politicians, Sicco Mansholt ranks 6,939 out of 15,710. Before him are Anna of Trebizond, Najib Razak, George, Duke of Bavaria, Grand Duke Dmitry Konstantinovich of Russia, Mikhail Semyonovich Vorontsov, and Otto Wächter. After him are Emperor Shizong of Liao, Antonio de Mendoza, Thibaw Min, George I of Bulgaria, Princess Marie Louise of Bulgaria, and Quett Masire.