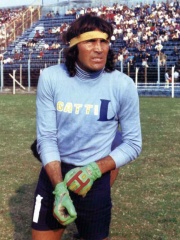 Hugo Orlando Gatti (born 19 August 1944) is an Argentine former professional football goalkeeper who played in the Argentine Primera División for 26 seasons and set a record of 765 league and 52 international appearances, totaling 817 games played. Gatti is the player with most appearances in the Argentine league ever.During his career, Gatti won three Primera División titles, two Copa Libertadores tournaments, and one Intercontinental Cup, all with Boca Juniors, and played professionally until the age of 44. Gatti, nicknamed El Loco (The Madman) was recognized for his charisma, his innovative playing style for his position and his eccentricity. Read more on Wikipedia