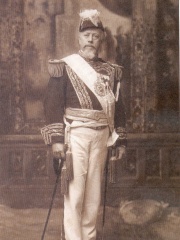 Alejo Julio Argentino Roca Paz (July 17, 1843 – October 19, 1914) was an army general and statesman who served as President of Argentina from 1880 to 1886 and from 1898 to 1904. Roca is the most important representative of the Generation of '80 and is known for directing the Conquest of the Desert, a series of military campaigns against the indigenous peoples of Patagonia. During his two terms as president, many important changes occurred, particularly major infrastructure projects of railroads and port facilities; increased foreign investment, along with immigration from Europe; large-scale immigration from southern Europe; expansion of the agricultural and pastoral sectors of the economy; and laicizing legislation strengthening state power. Read more on Wikipedia

Among politicians, Julio Argentino Roca ranks 6,843 out of 15,710. Before him are Stephen III, Duke of Bavaria, Patrick Devedjian, Yeongnyu of Goguryeo, Thomas Francis, Prince of Carignano, Prince Adolphus, Duke of Cambridge, and Leonardo Conti. After him are Emperor Takakura, Kim Jong-pil, Hedwig of Saxony, Sextus Julius Caesar, Emperor Kōmyō, and Franz Vranitzky.