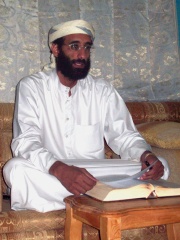 Anwar Nasser al-Awlaki (also spelled al-Aulaqi, al-Awlaqi; Arabic: أنور العولقي‎ Anwar al-‘Awlaqī; April 21 or 22, 1971 – September 30, 2011) was a Yemeni-American imam and alleged militant. According to U.S. government officials, as well as being a senior recruiter and motivator, he was centrally involved in planning terrorist operations for the Islamist militant group al-Qaeda, but have not released evidence that could support this statement. Al-Awlaki became the first U.S. citizen to be targeted and killed by a U.S. drone strike without the rights of due process being afforded. President Barack Obama ordered the strike which was effectively ordering the execution of a U.S. Read more on Wikipedia

Since 2007, the English Wikipedia page of Anwar al-Awlaki has received more than 2,171,320 page views. His biography is available in 34 different languages on Wikipedia making him the 170th most popular extremist.