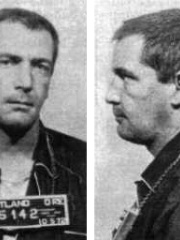 Gary Mark Gilmore (Faye Robert Coffman) (December 4, 1940 – January 17, 1977) was an American criminal who gained international attention for demanding the implementation of his death sentence for two murders he had admitted to committing in Utah. After the U.S. Supreme Court upheld a new series of death penalty statutes in the 1976 decision Gregg v. Georgia, he became the first person in almost ten years to be executed in the United States. Read more on Wikipedia

Since 2007, the English Wikipedia page of Gary Gilmore has received more than 1,100,267 page views. His biography is available in 15 different languages on Wikipedia making him the 151st most popular extremist.