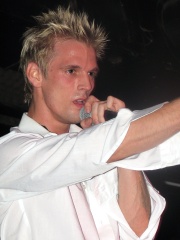 Aaron Charles Carter (born December 7, 1987) is an American rapper, singer, songwriter, actor, dancer and record producer. He first came to fame as a pop and hip hop singer in the late 1990s, establishing himself as a star among pre-teen and teenage audiences during the first years of the 21st century with his four studio albums. Born in Tampa, Florida, Carter began performing at age seven and released his self-titled debut album in 1997 at age 9, selling a million copies worldwide. Read more on Wikipedia

Among singers, Aaron Carter ranks 2,112 out of 3,541. Before him are Idan Raichel, Kayah, Paula Cole, Redman, Jerry Nelson, and Gentleman. After him are Pierre Bouvier, Natasja Saad, Willow Smith, Iselin Solheim, Warrel Dane, and Natalia Lafourcade.