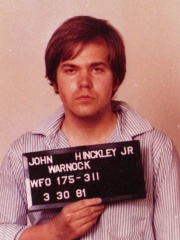 John Warnock Hinckley Jr. (born May 29, 1955) is an American who, on March 30, 1981, attempted to assassinate U.S. President Ronald Reagan in Washington, D.C. He wounded Reagan with a bullet from a revolver that ricocheted and hit Reagan in the chest. He also wounded police officer Thomas Delahanty and Secret Service agent Tim McCarthy, and he critically wounded Press Secretary James Brady, who was permanently disabled in the shooting and died 33 years later on August 4, 2014. Read more on Wikipedia

Since 2007, the English Wikipedia page of John Hinckley Jr. has received more than 3,223,153 page views. His biography is available in 22 different languages on Wikipedia making him the 158th most popular extremist.