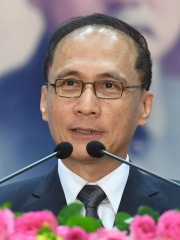 Lin Chuan (Chinese: 林全; pinyin: Lín Quán; Wade–Giles: Lin² Chʻüan²; born 13 December 1951) is a Taiwanese economist and politician who served as Premier of the Republic of China from 2016 to 2017 under President Tsai Ing-wen. Read more on Wikipedia

Since 2007, the English Wikipedia page of Lin Chuan has received more than 81,909 page views. His biography is available in 16 different languages on Wikipedia making him the 12,709th most popular politician.

Among politicians, Lin Chuan ranks 12,600 out of 14,801. Before him are Justiniano Borgoño, Michèle Pierre-Louis, Lester Bird, Amrit Kaur, William Deane, and Themba Dlamini. After him are Basuki Tjahaja Purnama, Tihomir Orešković, Guido Knopp, Siv Jensen, Jacques Sylla, and Talorc I.