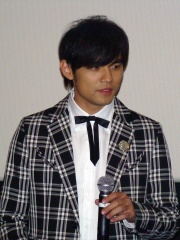 Jay Chou (born 18 January 1979) is a Taiwanese singer, songwriter, rapper, record producer, film producer, actor, magician, President of fashion brand-PHANTACi and director. Dubbed the "King of Mandopop", Chou has been recognized as one of the most successful and influential Asian entertainers for his outstanding achievements in the Chinese language music scene. Read more on Wikipedia

Since 2007, the English Wikipedia page of Jay Chou has received more than 3,145,107 page views. His biography is available in 35 different languages on Wikipedia making him the 1,125th most popular musician.

Among MUSICIANS In Taiwan

Among musicians born in Taiwan, Jay Chou ranks 1. After him are Jolin Tsai (1980).