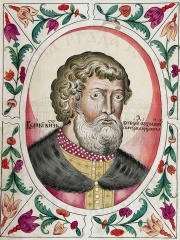 Vsevolod II Olgovich (Cyrillic: Всеволод II Ольгович) (died August 1, 1146) was the Prince (Knyaz) of Chernigov (1127–1139) and Grand Prince (Velikiy Knyaz) of Kiev] (Kyiv, 1139–1146), son of Oleg Svyatoslavich, Prince of Chernigov. Vsevolod married Maria Mstislavna of Kiev, the daughter of Grand Duke Mstislav of Kiev. They had two sons and two daughters: Sviatoslav III of Kiev Yaroslav II Vsevolodovich, born in 1139 Anna of Chernigov, married a prince of Halych, son of Vasylko Rostyslavych according to some chronicles Zvenislava of Chernigov, married Boleslaw I the Tall, Duke of WroclawThough he had two sons, Vsevolod's chosen successor was his brother, Igor, and he obtained pledges from his subjects to accept Igor as his heir. Read more on Wikipedia

Page views of Vsevolod II of Kievs by language

Among politicians, Vsevolod II of Kiev ranks 7,235 out of 15,710. Before him are Frederick, Duke of Saxe-Altenburg, Borso d'Este, Duke of Ferrara, Andronikos Palaiologos, Meresankh III, Louis Armand I, Prince of Conti, and Kaykaus II. After him are James II of Cyprus, Vasily of Kostroma, Duy Tân, Dries van Agt, Eugen Ehrlich, and Hamida Djandoubi.