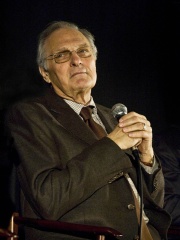 Alan Alda (; born Alphonso Joseph D'Abruzzo; January 28, 1936) is an American actor. A six-time Emmy Award and Golden Globe Award winner, he played Hawkeye Pierce in the war television series M*A*S*H (1972–1983). He has had recurring roles on television programs such as The West Wing, and 30 Rock, and has received critical acclaim for films such as Same Time, Next Year (1978) alongside Ellen Burstyn and his directorial debut film The Four Seasons (1981) opposite Carol Burnett. Alda is also known for his performances in Woody Allen's dramedy film Crimes and Misdemeanors (1989), David O. Read more on Wikipedia

Alan Alda is most famous for his role as Hawkeye Pierce in the television series M*A*S*H.