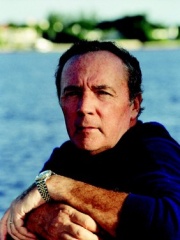 James Brendan Patterson (born March 22, 1947) is an American author. Among his works are the Alex Cross, Michael Bennett, Women's Murder Club, Maximum Ride, Daniel X, NYPD Red, Witch and Wizard, and Private series, as well as many stand-alone thrillers, non-fiction, and romance novels. His books have sold more than 425 million copies, and he was the first person to sell 1 million e-books. Read more on Wikipedia

Among writers, James Patterson ranks 1,375 out of 5,755. Before him are Subramania Bharati, James Clavell, Neil Gaiman, Widukind of Corvey, Alfonsina Storni, and Zachris Topelius. After him are Boris Pahor, Diagoras of Melos, Avienus, Marie Anne Lenormand, Rodolphe Töpffer, and Hovhannes Tumanyan.