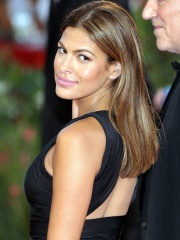 Eva de la Caridad Méndez (; born March 5, 1974), known professionally as Eva Mendes, is an American actress, model and businesswoman. Her acting career began in the late 1990s, with a series of roles in films such as Children of the Corn V: Fields of Terror (1998) and Urban Legends: Final Cut (2000). Mendes's performance in Training Day (2001) marked a turning point in her career and led to parts in the commercially successful films 2 Fast 2 Furious (2003) and Hitch (2005). Read more on Wikipedia

Since 2007, the English Wikipedia page of Eva Mendes has received more than 15,484,873 page views. Her biography is available in 57 different languages on Wikipedia making her the 984th most popular actor.