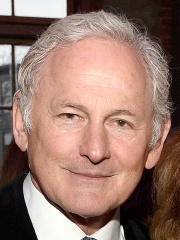 Victor Joseph Garber (born March 16, 1949) is a Canadian-American actor and singer known for his work in television, film, and theatre. He started his career on the Broadway stage playing: Jesus in Godspell; Anthony Hope in Sweeney Todd: The Demon Barber of Fleet Street; and John Wilkes Booth in Assassins. He would later go on to earn four Tony Award nominations for his performances in Deathtrap, Little Me, Lend Me a Tenor, and Damn Yankees. Read more on Wikipedia

Since 2007, the English Wikipedia page of Victor Garber has received more than 4,339,070 page views. His biography is available in 35 different languages on Wikipedia making him the 1,029th most popular actor.