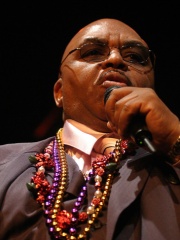 Solomon Vincent McDonald Burke (born James Solomon McDonald, March 21, 1936 or 1940 – October 10, 2010) was an American preacher and singer who shaped the sound of rhythm and blues as one of the founding fathers of soul music in the 1960s. He has been called "a key transitional figure bridging R&B and soul", and was known for his "prodigious output".He had a string of hits including "Cry to Me", "If You Need Me", "Got to Get You Off My Mind", "Down in the Valley", and "Everybody Needs Somebody to Love". Burke was referred to honorifically as "King Solomon", the "King of Rock 'n' Soul", "Bishop of Soul", and the "Muhammad Ali of soul". Read more on Wikipedia

Since 2007, the English Wikipedia page of Solomon Burke has received more than 618,267 page views. His biography is available in 34 different languages on Wikipedia making him the 335th most popular singer.