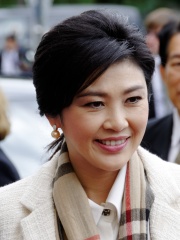 Yingluck Shinawatra (Thai: ยิ่งลักษณ์ ชินวัตร, RTGS: Yinglak Chinnawat, pronounced [jîŋ.lák t͡ɕʰīn.nā.wát]; Chinese: 丘英樂; born 21 June 1967), nicknamed Pou (Thai: ปู, RTGS: Pu, pronounced [pūː], meaning "crab"), is a Thai businesswoman, politician and a member of the Pheu Thai Party who became the Prime Minister of Thailand following the 2011 election. Yingluck was Thailand's first female prime minister and its youngest in over 60 years. She was removed from office on 7 May 2014 by a Constitutional Court decision.Born in Chiang Mai Province into a wealthy family of Hakka Chinese descent, Yingluck Shinawatra earned a bachelor's degree from Chiang Mai University and a master's degree from Kentucky State University, both in public administration. Read more on Wikipedia

Among BUSINESSPEOPLE In Thailand

Among businesspeople born in Thailand, Yingluck Shinawatra ranks 2. Before her are Chaleo Yoovidhya (1923). After her are Vichai Srivaddhanaprabha (1958).