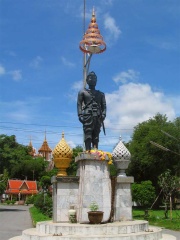 King U-thong (Thai: พระเจ้าอู่ทอง) or King Ramathibodi I (Thai: สมเด็จพระรามาธิบดีที่ ๑ pronunciation ; 1314–1369) was the first king of the kingdom Ayutthaya (now part of Thailand),: 222  reigning from 1351 to 1369. He was known as Prince U Thong (meaning "Golden Cradle") before he ascended to the throne in 1350. There are many theories about Uthong's background, including possibly being a descendant of Mangrai.: 27 According to a better-known source, a seventeenth-century account by Dutchman Jeremias Van Vliet, a Renowned Legend stated that Ramatibodi was an ethnic Chinese, having sailed down from China. Read more on Wikipedia

Since 2007, the English Wikipedia page of Uthong has received more than 99,998 page views. His biography is available in 22 different languages on Wikipedia. Uthong is the 7,604th most popular politician (down from 7,220th in 2019), the 28th most popular biography from Thailand and the 21st most popular Thai Politician.

Page views of Uthongs by language

Among politicians, Uthong ranks 7,604 out of 15,577. Before him are Spytihněv II, Duke of Bohemia, Estanislao Figueras, Prince John Konstantinovich of Russia, Abdullah of Pahang, Jovan Divjak, and Adolfo López Mateos. After him are An Shigao, Félix Malloum, Mahamadou Issoufou, Zenkō Suzuki, Prince Philipp of Saxe-Coburg and Gotha, and King Xian of Zhou.