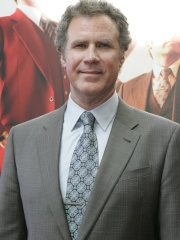 John William Ferrell (; born July 16, 1967) is an American actor, comedian, producer, writer, and businessman. He first established himself in the mid-1990s as a cast member on the NBC sketch comedy show Saturday Night Live, and has subsequently starred in comedy films such as Anchorman: The Legend of Ron Burgundy (2004), Talladega Nights (2006), Step Brothers (2008), The Other Guys (2010), and Anchorman 2: The Legend Continues (2013), all but one of which he co-wrote with his comedy partner Adam McKay. The two also founded the comedy website Funny or Die in 2007. Read more on Wikipedia

Page views of Will Ferrells by language

Among actors, Will Ferrell ranks 1,380 out of 10,030. Before him are Robert Downey Sr., Kurtwood Smith, Jack Hawkins, Peter Lawford, Momoko Kōchi, and Edward Mulhare. After him are Akim Tamiroff, Jason Isaacs, Fred Ward, Marisa Pavan, George Chakiris, and Pauley Perrette.