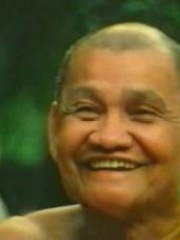 Chah Subhaddo (Thai: ชา สุภัทโท, known in English as Ajahn Chah, occasionally with honorific titles Luang Por and Phra) also known by his honorific name "Phra Bodhiñāṇathera" (Thai: พระโพธิญาณเถร, Chao Khun Bodhinyana Thera; 17 June 1918 – 16 January 1992) was a Thai Buddhist monk. He was an influential teacher of the Buddhadhamma and a founder of two major monasteries in the Thai Forest Tradition. Respected and loved in his own country as a man of great wisdom, he was also instrumental in establishing Theravada Buddhism in the West. Read more on Wikipedia

Since 2007, the English Wikipedia page of Ajahn Chah has received more than 331,435 page views. His biography is available in 17 different languages on Wikipedia. Ajahn Chah is the 1,326th most popular religious figure (down from 1,261st in 2019), the 29th most popular biography from Thailand and the 2nd most popular Thai Religious Figure.

Among religious figures, Ajahn Chah ranks 1,326 out of 2,238. Before him are Carpocrates, George Müller, Pelagio Galvani, Paisius Velichkovsky, Nicetas of Remesiana, and Ludovico Ludovisi. After him are Edward Schillebeeckx, Angelo Dundee, Dashi-Dorzho Itigilov, Saint Kilian, Phoebe, and Daniel Peter.

Among RELIGIOUS FIGURES In Thailand

Among religious figures born in Thailand, Ajahn Chah ranks 2. Before him are Michael Michai Kitbunchu (1929). After him are Kriengsak Kovitvanit (1949).