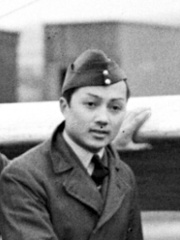 Prince Birabongse Bhanudej Bhanubandh (Thai: พีรพงศ์ภาณุเดช; RTGS: Phiraphong Phanudet; 15 July 1914 – 23 December 1985), better known as Prince Bira of Siam (now Thailand) or by his nom de course B. Bira, was a member of the Thai royal family, racing driver, sailor, and pilot.Birabongse raced in Formula One and Grand Prix races for the Maserati, Gordini, and Connaught teams. He was the only Southeast Asian driver to compete in Formula One until Malaysia's Alex Yoong joined Minardi in 2001, and the only Thai driver to compete in Formula One until Alexander Albon made his debut in 2019. Read more on Wikipedia

Among politicians, Birabongse Bhanudej ranks 6,536 out of 15,577. Before him are Henry A. Wallace, Lluís Llach, Leonor Teles, Otto Abetz, Az-Zahir, and Nebuchadnezzar III. After him are Enrique Peña Nieto, Rhesus of Thrace, Edgar, King of Scotland, William I, Count of Hainaut, Rifaat al-Assad, and Wacho.